On the 12th of January 2021, Foundation for Youth Initiative and Whittaker’s Peace and Development Initiative jointly organized our second boot camp exercise in Juba selected youth groups who were drawn from the WPDI’s pool of trained youth in Central Equatoria State in South Sudan. This 4 day Boot camp took place in DefyHate Now’s aesthetically pleasing office space and conference hall in Juba. The boot camp was structured to provide youth with hands-on business skills designed to help them build strong business models that play roles in developing business ventures and at the same provide them with the platform to pitch business proposals that can be screened and selected for funding upon approval by USADF.

The Business Canvas Boot camp was successfully conducted from January 12th -15th January 2021 in Juba, South Sudan. Initially, a list containing 25 delegates was proposed from the pool of WPDI’s trained youth but this was trimmed down to 12 delegates given the situation of COVID-19 protocols and their associated measures. The participants were transported to Juba from their respective counties and payams, accommodated in hotels in Juba for a period of four days of the exercise. The FYI team trained the participants in business tools that gave them skills to generate ideas, refined proposals, and competed for their venture before the 3-man panelists.

Out of the 12 participants that pitched their Business plans; and make a selection of 10. The Seed capital support the participants will receive in 2021 is an initial $10,000 each to 10 selected winners of the Business Plan Boot camp Competition. FYI’s team came up with a scorecard with a list of criteria for scoring the business plan pitches for the participants. This scorecard system ensured a very fluid and authentic and most importantly fair scoring of the presentations to ensure full transparency that is going solely based on the business idea fitting the right selection criteria which are; the viability and profitability of the business idea, whether the aim and goal of the business was achievable; the market analysis competency; value proposition, marketing, and sales strategy; socioeconomic impact on surrounding communities and the risk and loss assessment amongst other components. Ten out of the 12 applications, as indicated above, were selected based on the predetermined criteria, and they were recommended for further development and funding upon approval by the USADF.

KEDA: Taking Advantage of a Global Pandemic to Upscale their Peanut Paste Production

The KEDA (Koyle East Development Association) Peanut Paste capacity-building project has proved an immense success for the group. During this current COVID-19 pandemic, many businesses have been impacted adversely but due to planning ahead, the KEDA group managed to increase their production as they settled the issue of machinery through the USADF Grant and began stocking the raw materials of their groundnuts (peanuts) from November by paying attention to the global news after hearing the report of the first COVID-19 cases and decided to prepare themselves in case of a global and national crisis. They accomplished this by going to the production site once a week, the cleaning of the groundnuts; The four stages for their groundnut production being; shelling/roasting of the nuts where the groundnuts, the next stage is peeling the outer layers of the groundnuts. Then cleaning is done after they have been removed from the peeling machine then they kept in the grinding machine where the G-nuts are ground into small peanuts and then they are kept into the containers ready to be taken the producers who use their machinery to turn the raw nut into peanut butter, which was tested and was proven to be good quality ready for consumption. They process their peanut butter by putting it in the filling machine depending on the grams after they produced the peanut butter. They locally commercialized the peanut, as the locals supply them with the groundnuts. They get the supply to see if it is clean, take it to the roaster, peel it, clean it again and grind it and put them in commercial packaging containers called “SHUSU-SHUSU Peanut Butter “approved by the South Sudan Standard Bureau which they supply their peanut butter to the vendors and so far, they have six vendors (supermarkets where they supply the 500gs and 250gs) to multiple commercial vendors in Juba; Juba Mall, Jamal Shop, Nasama Supermarket, Elenna Supermarket, Sabriem Supermarket, Super Market Tonj, and Mine-Supermarket where their products are competing with imported goods to the market and NGO’s.

Though the group is doing well, the issue with the pandemic is the prices of their peanut butter keep’s fluctuating as the economy is unstable, however, due to their planning ahead they are generating more sales because most peanut paste producers in Juba have been affected by the pandemic and therefore their production is low compared to KEDA, giving the group an advantage in the market.

Their future plans for expansion is to educate the local people to produce more and provide more farmers with seeds to expand their raw material supplier base whilst benefiting multiple farmers who will give back in the form of the volume of grams. They are looking forward to producing groundnuts oil and sesame. The group of suppliers agreed to supply them with the groundnuts in three months as they are ready for supply.

The USADF C.A.R.E.S Emergency Fund given to the group during the current COVID-19 -19, 75% is going to be used to upscale their groundnuts production and improve some operation inputs. The group also plans on giving the local public COVID-19 awareness by running a campaign on safe practices and providing safety gear such as masks to the farmers and soaps. Their advice to farmers (G-nuts farmers) is locally producing the groundnuts for the country’s consumption to reduce the country’s dependency on importing products that can be locally produced.

“We would like to thank our granters USADF and FYI for supporting us during the Covid-19 and that it will come to an end for farmers to continue producing their products in South Sudan. We would on our side do our best in the production of the G-nuts into peanut butter and let us keep on doing what we can to help the country’s agricultural and private sector improve” – John Faustino, Business Manager

On the 20th of April 2020, the United States African Development Foundation launched the USADF C.A.R.E.S COVID -19 Program to build resilience among African enterprises and entrepreneurs while combating COVID-19 -19 IN Africa. The program has assisted their South Sudanese grantees with an emergency fund to assist them during these hard times. 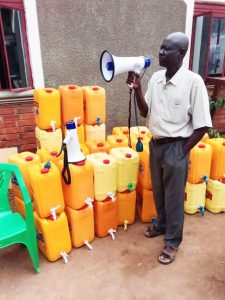 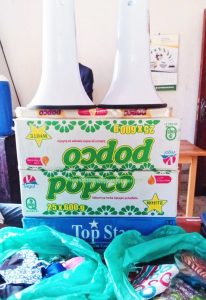 The Akari Development Association (ADA) have used their emergency fund to supply protective gears such as masks and hand sanitizers to many farm members and the surrounding community. They have also taken the initiative to set up multiple handwashing stations by procuring 100 jerricans and hand soaps to distribute among their members and the small businesses operating in the communities in the Kpuri and Kappo areas in Jubek County. Two Speeches by the ADA Board members were given during the coverage of this event by the SSBC (South Sudan Broadcasting Corporation)

There is currently no lockdown in South Sudan due to the economic situation as the vast population depending on daily incomes from small economic activities such as selling in markets, streets hawking, transportation and selling affordable food in small shops all across the city of Juba. ADA has taken it upon them to supply protection to the local community to carry out their daily activities safely as possible and minimizing the chance of contracting COVID-19 -19 to the best of their abilities.

“We would like to thank the USADF and FYI for supporting us and we shall continue to hope that COVID -19 shall come to an end in South Sudan so that our farmers will be free to cultivate and produce more for the sustainability of our people, until then we have to do what we can help” – Anna Nana Bona, Deputy Chairperson in the Board of Directors of Akari Development Association. 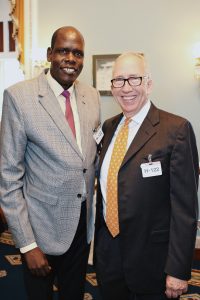